The Atlanta BeltLine Inc. earlier this year kicked off construction on its newest segment — the Westside Trail, a three-mile path with transit infrastructure that runs from Washington Park to Adair Park — neighborhoods originally shaped by stage coaches, streetcars and railroads that now are in need of revitalization. When it’s complete around fall 2017, it will connect four schools, four parks and a dozen neighborhoods in the 30310 ZIP code, one of the hardest hit during the Great Recession. 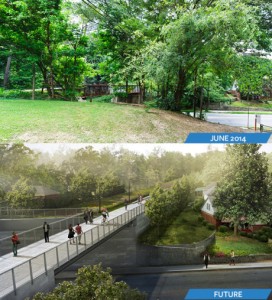 The Westside Trail is coming to a former CSX Corp. railway that became inactive in 1984. At $43 million, it’s easily one of the most significant investments for southwest Atlanta since MARTA began service there in the early 1980s.

“It is a historic moment that we are building it,” said Atlanta architect and urban planner Ryan Gravel, founding principal at Sixpitch whose master’s thesis in 1999 was the original vision for the Atlanta Beltline, a planned 22-mile loop of former railways that’s being transformed into trails, parks and, one day, transit lines. “There was some skepticism that it would come.”

To read the remainder of the article click here

If you want to sell a home along the Westside Trail and West End Trail along the Atlanta Beltline go to: Sell Your Home

If you want to buy a home along the Westside Trail and West End Trail along the Atlanta Beltline go to: Kevin Polite

“Quite often investors are willing to pay cash for a home and with the recent tightening of financial restrictions, coupled with the growing number of complaints about low appraisals, having a cash buyer has become even more appealing.”

“Nearly 4 million Americans are more than 60 days behind on their mortgage, and countless others are only a paycheck away from missing a mortgage payment. You’re not alone. ”  That’s why we’re here, to help home owners like you when you need it most.

Get Your Fair Cash Offer: Start Below!

Areas We Invest In