By on December 15, 2015 in Sylvan Hills Neighborhood 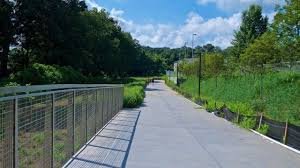 A Year After Groundbreaking, Westside Trail is Humming Along

[All photos and renderings via Atlanta Beltline.]

One year ago today, the Beltline’s Westside Trail hosted a ceremonial groundbreaking that lifted hype for the multi-use path to another level. Now, Beltline officials have published a visual update of the trail’s progress that could harken memories of the under-construction Eastside Trail for old-timers who lived in the city back in 2011. (Remember the ubiquitous gravel, random piping, half-built bridges and volcanic anticipation?) None of these late-October pics have captions, so it’s a bit of a photographic free-for-all, but an inspiring one nonetheless. The three-mile Beltline leg is on track for a 2017 opening. It will connect four parks and include 14 access points and a new bridge over Martin Luther King Jr. Drive. Unlike its Eastside counterpart, the trail is scheduled to debut with all lighting, security cameras and mile-markers.

View all posts by →

Learn more about us and find other resources on selling your house below. Like us, follow us, connect!

"Nearly 4 million Americans are more than 60 days behind on their mortgage, and countless others are only a paycheck away from missing a mortgage payment. You're not alone. "  That's why we're here, to help home owners like you when you need it most.

"Quite often investors are willing to pay cash for a home and with the recent tightening of financial restrictions, coupled with the growing number of complaints about low appraisals, having a cash buyer has become even more appealing."

Get Your Fair Cash Offer: Start Below!

Learn more about us and find other resources on selling your house below. Like us, follow us, connect!

Areas We Invest In